I WANT TO RIDE MY BICYCLE 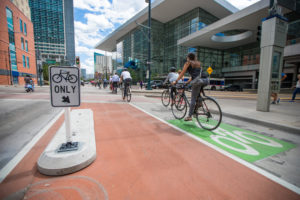 We’ve all seen these handy lanes around town. A reserved lane specifically for bicyclists that allow a safer commute for them, car drivers, and sidewalk pedestrians– especially in downtown areas. Regardless of your opinion on them, it’s hard to argue with those benefits.

There’s also a slew of other benefits to consider! In many downtown areas, there are a LOT of storefronts that benefit greatly by having these lanes in place. They essentially lead cycling enthusiasts and casuals alike straight to their shops, increasing revenue generation. In San Francisco, 65% of local merchants agreed that local bike lanes increased the overall number of shoppers entering their stores, which ended up giving them a boost to their total sales. Similarly, in New York City, the implementation of bicycle lanes off of 9th Avenue led to a 49% increase in local sales.

Now it’s not all about store revenue generation, health & safety are the major concerns that lead to implementation of these lanes. Let’s talk about the most obvious benefits in this regard: traffic safety, decreased commute times and increased cycling activity.

As can be expected when these lanes are introduced, effectively removing cyclists from motorists’ path, crashes involving cyclists decrease heavily. NCBI observed a significant decrease in motorist/bicycle crashes once bike lanes were installed in New York City. Similarly, commute times also decreased due to less cyclists disturbing the flow of traffic.

In Philadelphia, they added bike lanes to Spruce Street and Pine Street and saw a drastic increase of 95% in bicycle use and a 75% decrease of cyclists riding on sidewalks. So, more people are getting out there and utilizing a healthier mode of transportation and pedestrians are enjoying safer sidewalks due to the removal of cyclists from their walkways.

As with anything, there are all kinds of cons to bike lanes too, but it’s hard to refute the objective facts, especially when it comes down to public safety and health. Some cities have taken bike lanes to the extreme by widening bike lanes, even going so far as removing a full lane for motorists, like in some parts of Denver, CO. Which, both motorists and cyclists agree, is totally unnecessary because it causes a lot of traffic backups and the bike lanes really don’t need that extra space.

At any rate, implementation of these lanes are happening without any real consideration of maintaining them, especially if there are any obstructions between the motorist lanes and the cycling lanes.

Here’s the tricky part: Cleaning and maintaining these bike lanes. Just like the streets they run parallel to, they need cleaned periodically to ensure there’s no debris in the path of cyclists that could pose a hazard. Thing is, these are typically boxed in by barriers or reflective markers, effectively preventing your normal street sweeping operations to clean these lanes.

That’s where we come in. With the introduction of smaller street/sidewalk sweepers, including our 100% electric Dulevo Dzero² Electric Mini Sweeper ⚡, you can easily maintain and clean these bike paths. The cab is very comfortable for the operator with Air Conditioning, Radio, Photochromic Windows (they darken when exposed to sunlight), rear view camera, and exceptional control features, the Dzero² is perfect for this type of application. With the best technology, Dulevo has designed this sweeper to work for a full 8 hours before needing recharged so you can cover maximum ground with this machine. If fuel-powered machines is more your speed, we also have you covered with the Dulevo 850 Mini Sweeper which is very similar to the Dzero².

Even though you’ve got your bike lane sweeping program in place and it’s been very successful, you may have noticed that the lanes are getting really dirty, to the point that you can’t really even see the lines on the lane. Well, a simple solution to restore the surface back to its former glory is to take advantage of our Cyclone Systems. In particular, the Cyclone CY5500SK truck-mounted pressure washing system. This will allow you to restore both your bike lanes and sidewalks back to their former glory. Effectively removing tar, most stains, rubber marks, and all the other unsightly blemishes to these otherwise beautiful public service systems. Being truck-mounted, this allows you to travel to all your areas of concern at highway speeds, effectively making your cleaning efforts get the results you need.

Do you have questions? Interested in our Sidewalk and Bike Lane Cleaning Solutions? Contact us today and let’s get you up and running with a fantastic addition to your cleaning program!